Between 1500-1900, the Arenal Volcano remained silent and was considered by many to be extinct. In fact, the local farmers and ranchers who worked the land along its base referred to it as a mountain call "Cerro Arenal" (Arenal Mountain).
← →

However, on Monday, July 29, 1968 at 7:30 AM, the Arenal Volcano suddenly and violently erupted. The eruptions continued unabated for several days, burying over 15 square kilometers with rocks, lava and ash. When it was finally over, the eruptions had killed 87 people and buried 3 small villages – Tabacón, Pueblo Nuevo and San Luís – and affected more than 232 square kilometers of land. Crops were spoiled, property was ruined, and livestock was killed. It was a difficult time for the people of Arenal.

At the height of its ferocious activity, the volcano flung giant rocks – some weighing several tons – more than a kilometer away at a rate of 600 meters per second. These explosions would go on to form three new active craters.

Between 1968 and 2010, the Arenal Volcano was extremely active – it spewed hot rocks, smoke, ash, and lava from its top almost every day. None of the explosions, however, compared to that of 1968. Since then, the locals have taken caution in building their settlements and farms too close to the volcano. At the present, all towns, hotels and trails are set at a safe distance from Arenal.

Although the volcano took the lives of many men and women, it has given back to the community by becoming one of Costa Rica's most visited natural attractions. While agriculture is still important to the region, tourism has surpassed this to become the main source of income for the area’s people.

Map of the Arenal Volcano lava flow, by the Smithsonian Institute. 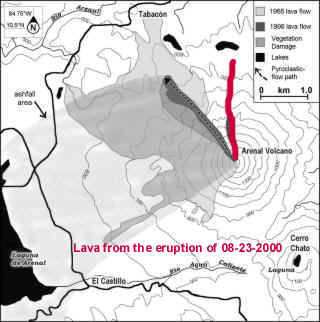 The red indicates the direction of the lava flow in 2000 & a major eruption.

Check out our Arenal Volcano Map for an update on the volcano’s current activity. It did, however, enter into a resting phase in 2010. At present, no eruptions are occurring.

There are a number of excursions in Arenal that allow for close viewing of the Arenal volcano. These include hikes through the Arenal Volcano National Park and the 4-in-one Arenal excursion, which includes a trip to the waterfall, a volcano hike, and a visit to one of the area’s hot springs.

All photos on this website are the exclusive property of Arenal.net © and can not be reproduced without our written consent except for non-profit purposes with a link and credit to this site.